This charming home displays a lovely English Tudor exterior. Now it was time to bring the outside in so it can mirror the medieval style proudly worn by the other areas of the house.

This delightful English Tudor home, known as the Palmer Estate, was built in 1929 and is just full of charm. Its exterior displays a number of elements that are tenets of this romantic, architectural style, including: decorative half-timbering, a steeply pitched roof, and mixed siding materials. The homeowner loved the character of the home but felt it was time for some modern renovations to the interior so that it would better reflect the medieval, English style of the rest of the home. 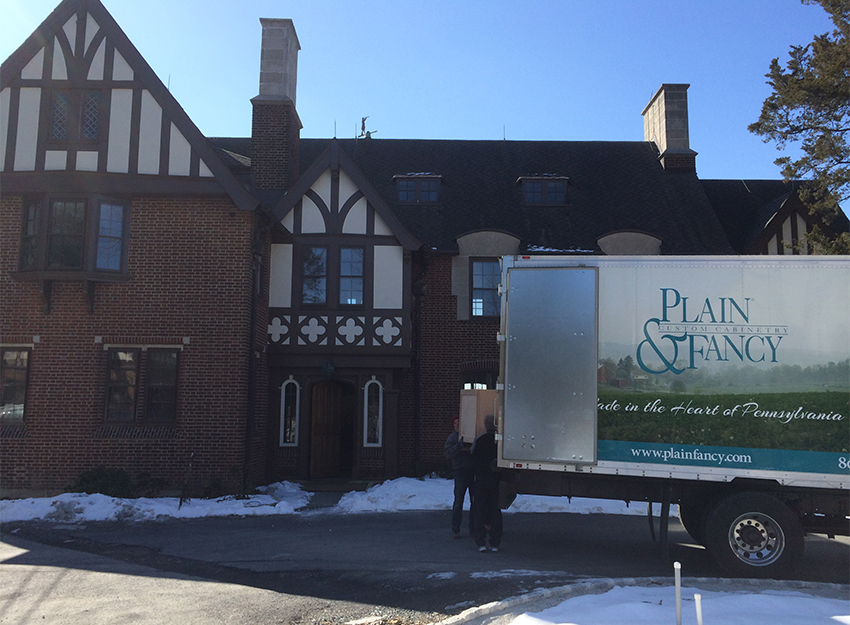 He chose to work with Jill Jarrett and Lauren Villano of Jarrett Design LLC. Jill graduated from Penn State University in 1987, with a Bachelor of science degree in Industrial Engineering. Some years later after totally remodeling her first home, Jill's passion and experience for becoming a designer blossomed. In spring of 2009, she earned her CKD (Certified Kitchen Designer) and CBD (Certified Bath Designer) from the NKBA. After working for a local kitchen dealer for a number of years, Jill launched her business in 2006.

Lauren Villano graduated from Marymount University in 2005 with a Bachelor of the Arts degree in Interior Design. In 2007, she was able to attain her Associate Kitchen and Bath Designer certification from the NKBA and hopes to soon gain the title of Certified Kitchen Designer (CKD).  She eventually landed at Jarrett Design, LLC where she enjoys working closely with homeowners and providing them with detailed attention to achieve the result they always dreamed of. 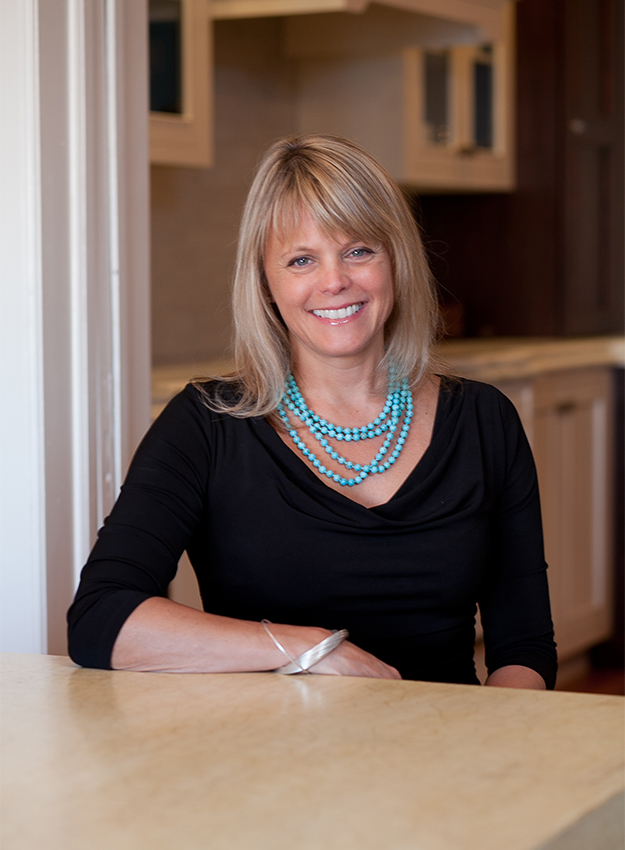 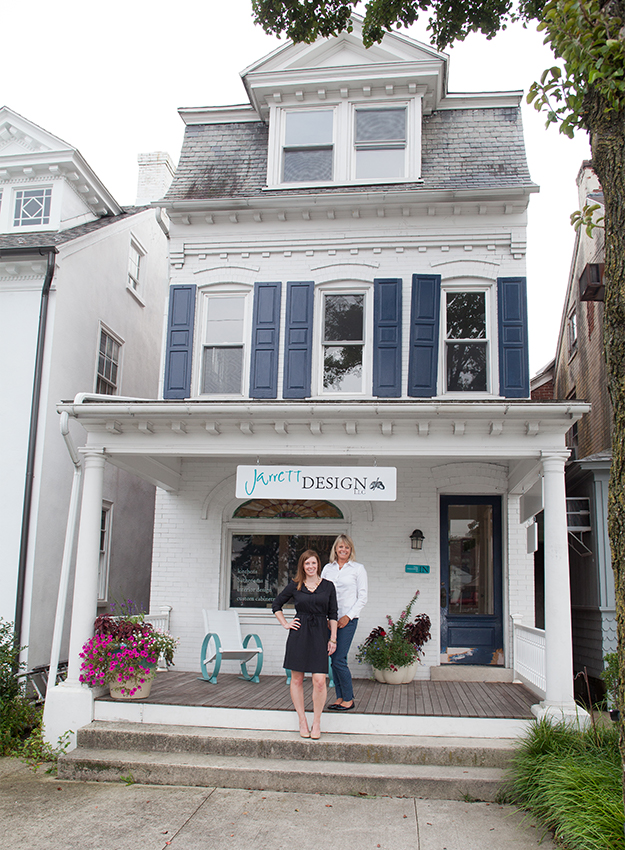 The homeowner had a clear vision for this kitchen remodel. In my interview with Jill, she summarised it this way, "He wanted a jaw-dropping, ultra functional space that family and friends could gather in for years to come." For many homeowners, the choices they make during a remodel are mostly swayed by what is best for the resale value. This homeowner, however, intends on passing the home down to future generations and was more focused on adding modern touches, but staying true to the original Tudor style.

"He wanted the best and spared no expense in restoring his impressive Tudor Home," Jill told me. "The homeowner chose Plain & Fancy because of the high quality and excellent value." She continued, "It was important to him to have the highest quality in terms of fit and finish and he wanted unlimited design ability to create an authentic new kitchen.

One of the challenges in remodeling this particular kitchen was that the homeowner wanted to modernize the space, all while staying true to the original Tudor look. Jill explained to me a number of ways in which she was able to accomplish this. 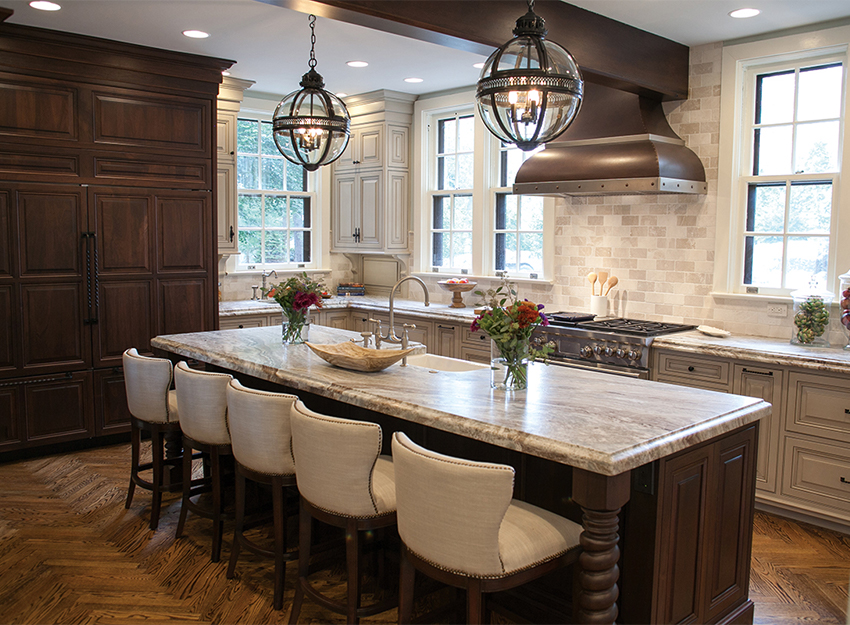 Wrought iron hardware, barley twist legs, and a beautifully concealed I beam all help to give this kitchen that classic Tudor style. 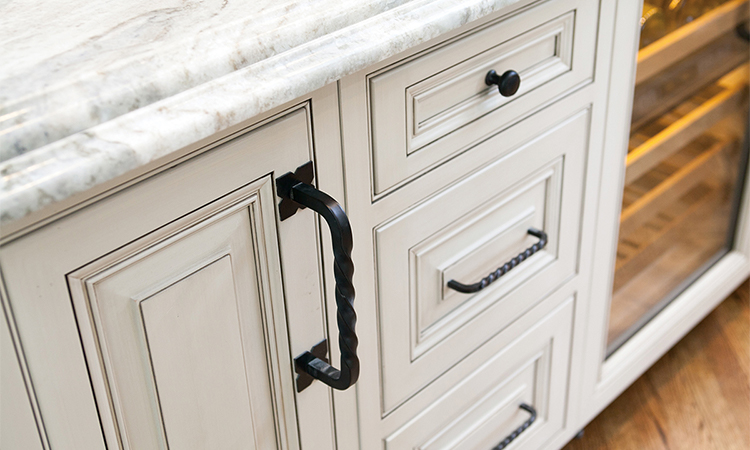 Another challenge was incorporating professional appliances into the kitchen, but keeping a warm, stately feel. The homeowner wanted professional style appliances because of his love for entertaining but wanted to maintain the warm, inviting feel of the rest of the home.  This was achieved by using appliance panels on the fridge and other major appliances. Several other smaller appliances, dishes and food items were hidden away behind a built in pantry. Beautiful, antique mirrored mullion doors ensure this pantry isn't just functional; it is a focal point of the kitchen. 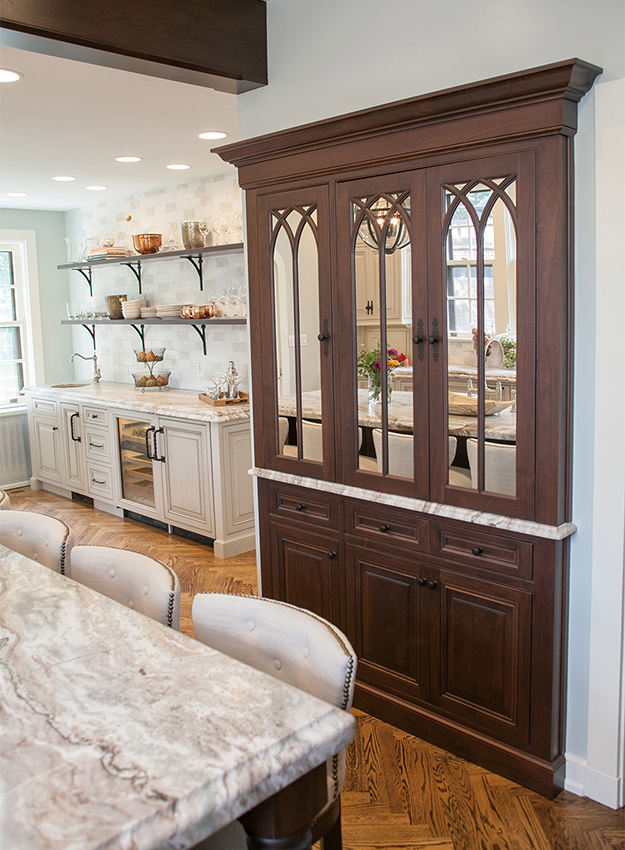 He was so intent on having a kitchen that, as he puts it, was full of wow that Jill and Lauren had to help him prioritize the design a bit. As Jill put it, "not every actor could be a star."

Being an old home there were a number of other issues with flooring, walls, and pipes. One thing that wasn't an issue though, was storage. The homeowner told Jill that it was very difficult to run out of storage space once the remodel was complete. Now that is a problem I think every homeowner would like to have.

It Starts with a Design

It isn't unusual to hear about homeowners who love their finished kitchen. Nearly everybody feels this way. What we don't typically hear though, is how much one of our customers enjoyed working through the design process with their dealer, but this homeowner did. Jill made sure to mention this to me during our interview. She talked about how much he enjoyed the design process and the material selection. He especially enjoyed choosing colors and pairing them together. Once that came together he knew the rest of the project would as well.

He also enjoyed seeing the final renderings that Lauren had completed before the renovation began. 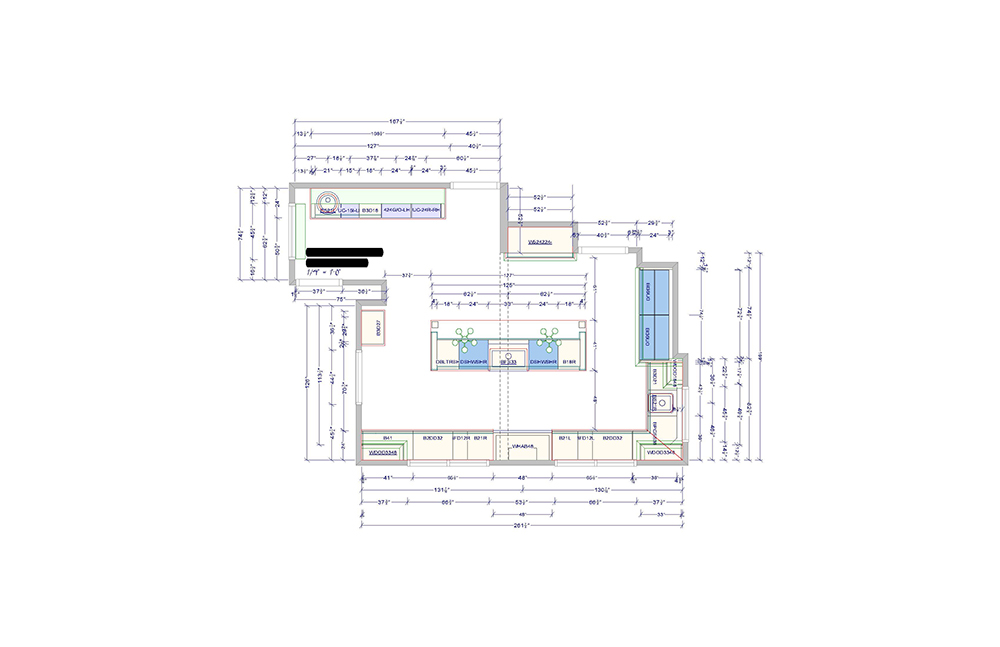 One of the Kitchen layouts worked on during the design process. 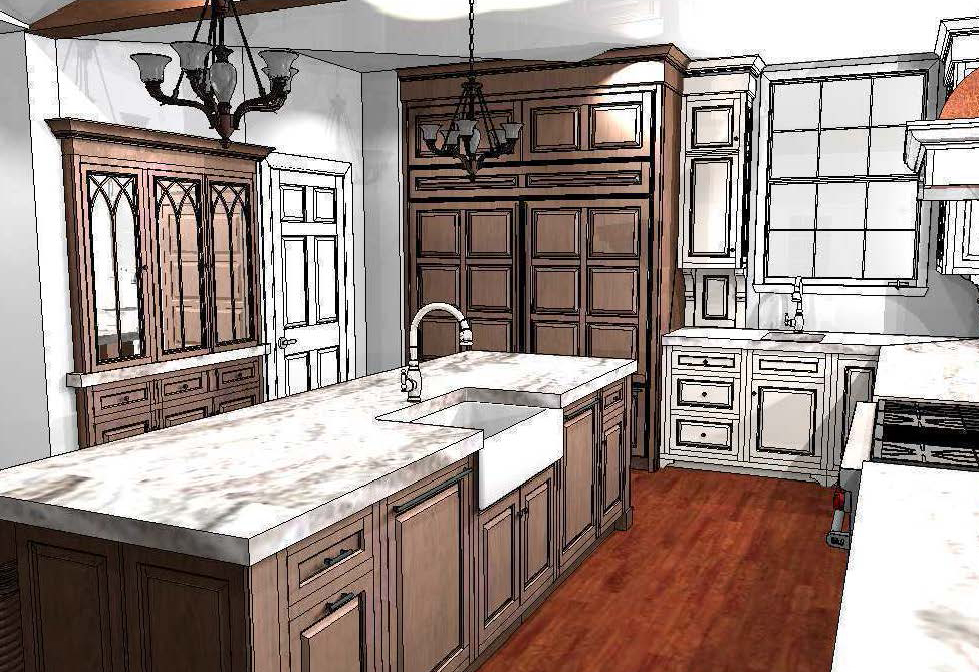 One of the Final Kitchen Renderings of the Palmer Estate 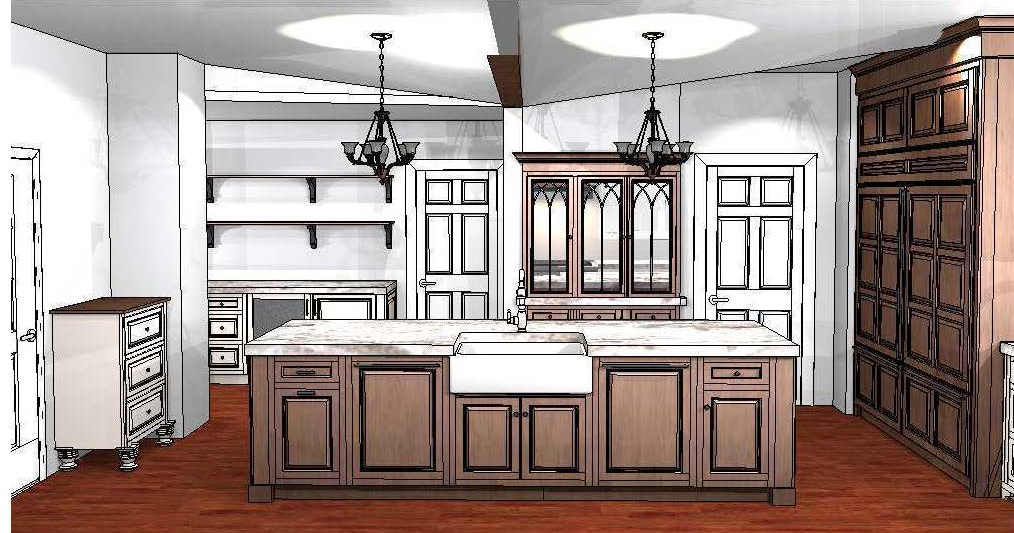 Kitchen Rendering from a different angle of the space

More than Just a Kitchen Remodel

Whenever I am doing an interview with a designer on a kitchen remodel one of the questions I always like to ask is, how did the homeowner feel about the remodel. Jill couldn't wait to share the experience of the homeowner with me. "He was immensely proud and very excited to show family and friends," she said. Then she shared with me a very touching experience the homeowner had soon after the remodel was completed. He had a celebration of life event for his father, who passed away before the remodel could be completed. He regretted that he did not have a video camera setup in the kitchen to capture everyone's reactions. Anyone who saw the beautiful, new Tudor Kitchen couldn't stop talking about how beautiful it was. 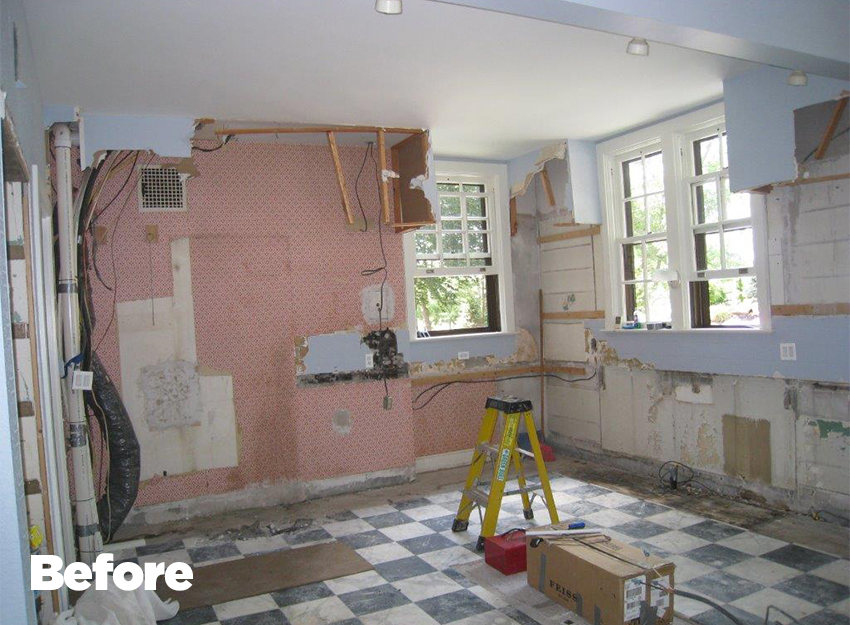 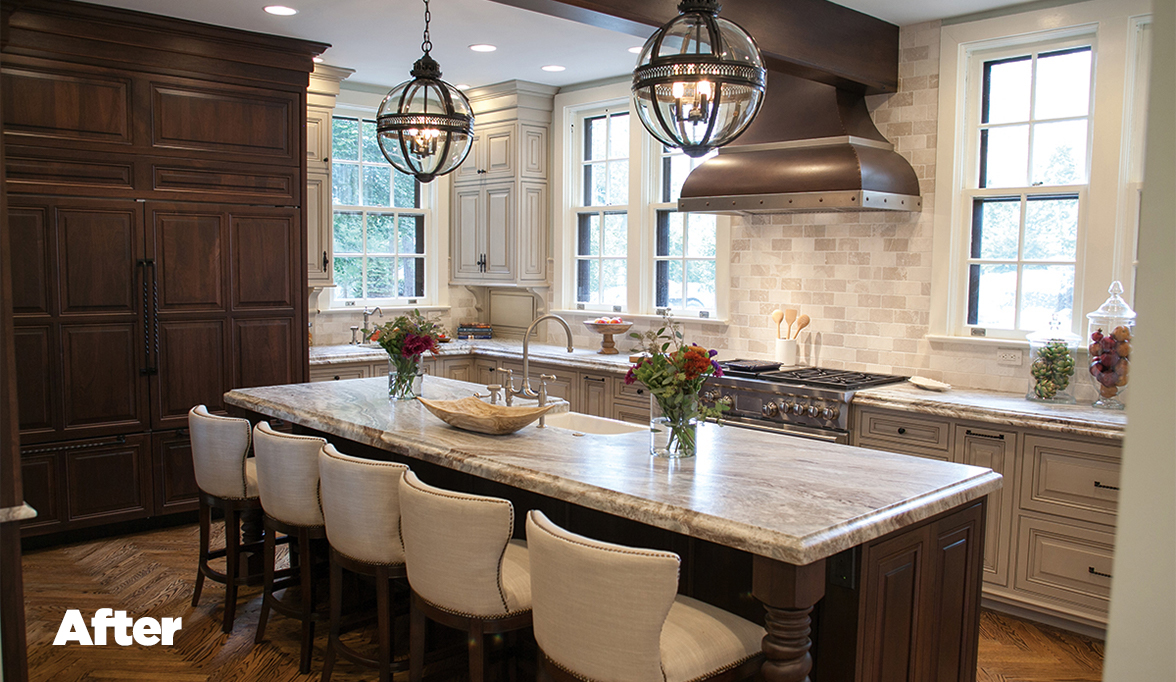 Kitchen remodel picture after the English Tudor remodel has been completed 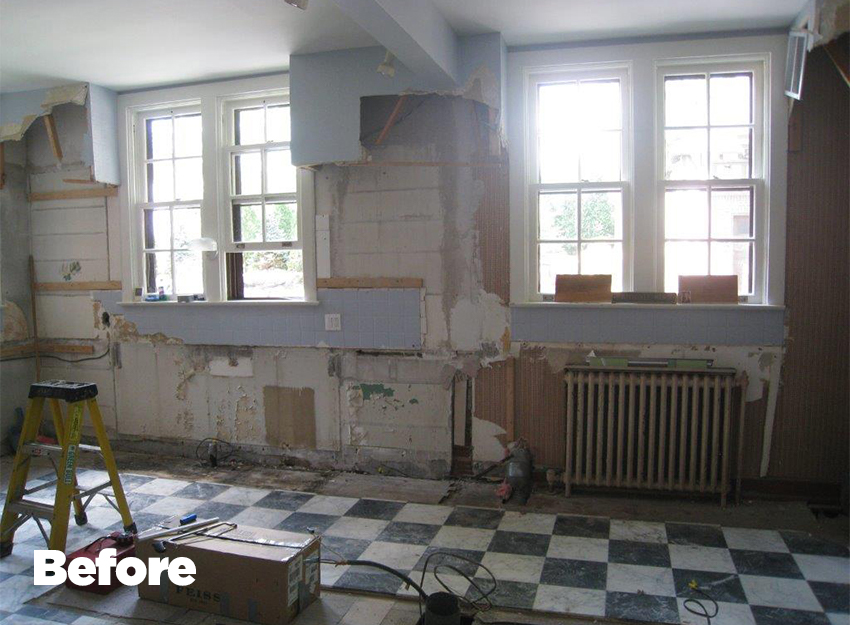 A Before kitchen remodel picture of where the hood, range and kitchen island would eventually be placed 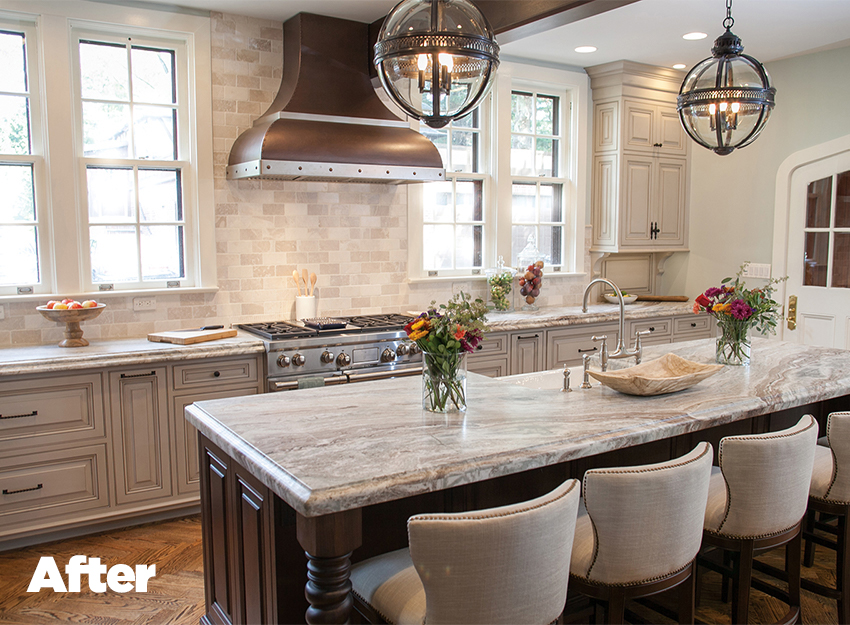 Kitchen remodel photo of the Hood, Range and Island after the kitchen has been completed. 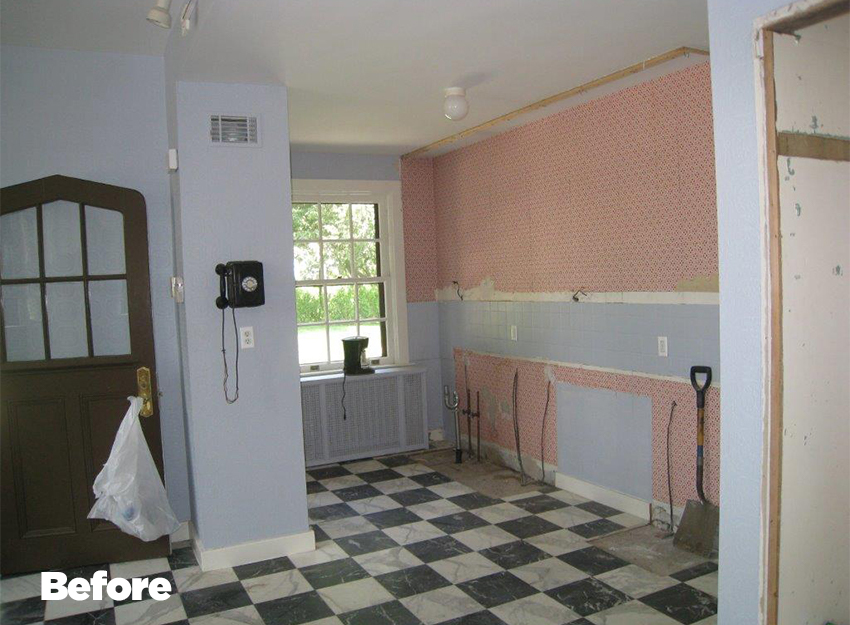 A Before kitchen remodel photo of where the wet bar and open shelving will be. 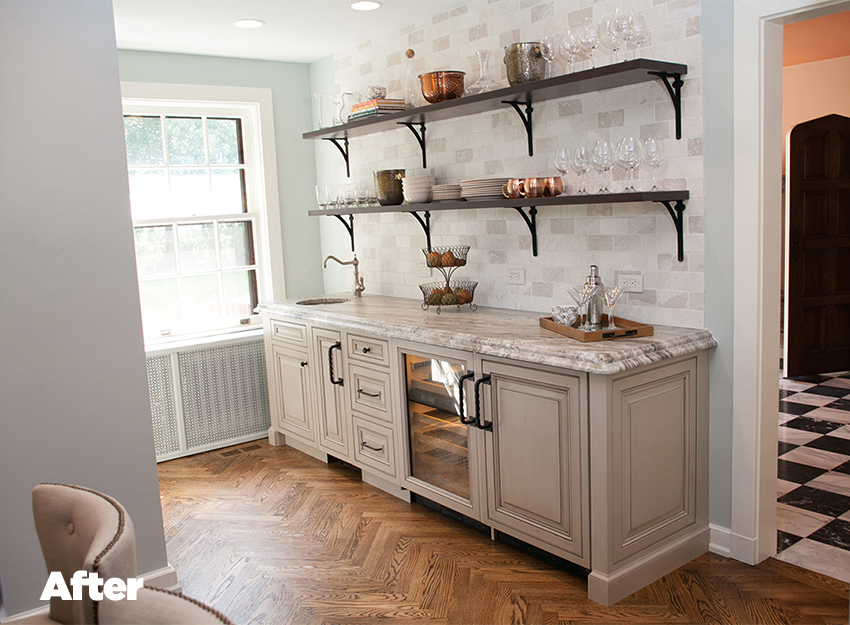 A photo of the wet bar and open shelving after the remodel has been completed.

The relationship between a designer and a homeowner is crucial to a successful remodel. This is a process that sometimes takes 6 months to a year in order to complete, which is why it is so important for the homeowner and designer to be able to have a good working relationship. This homeowner enjoyed working with Jill and her team on his remodel, from design all the way through to the finished kitchen. For Jill, the feeling was mutual. When I asked her what her favorite part of the remodel was she unambiguously shared with me that it was the excitement he had and continues to have for his new kitchen. "That was without a doubt the most memorable part of this remodel." Jill said. 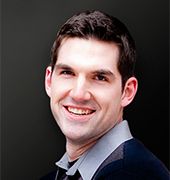 Shane manages all of Plain & Fancy's social media content and plays an active role in the marketing department. He is the only third generation family member who works full time at the company and has been with Plain & Fancy for about 5 years. He spends his off time with his wife and engaging in his favorite hobby, photography.

Color trends are constantly shifting — and what, exactly, is in style can differ depending on who you ask. Many people look to the concept of the color of the year for insight. Several colors of the year exist, however, and these often seem to have little rhyme or reason.

From its humble beginning as a small cabinet shop in 1961, Majestic Kitchens & Bath has been an impactful name in the home improvement industry ever since; forging the way that homeowners and interior design professionals approach their decisions and embrace their imagination.

Want to learn how to properly clean your Plain & Fancy cabinets? Here are the best techniques.